Is Google Wave Doomed to Fail? Not So Fast...

Last weekend, I spent a good portion of my "free-time" watching the one-hour-twenty-minutes Google Wave demo from the Google I/O conference.

While I found my self getting caught up in the excitment of it all, I couldn't help but feel a sense of DejaVu...as if I had seen something like this before, that had failed miserably. And then, I checked my bookshelf: 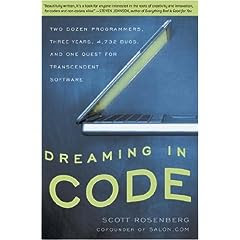 Dreaming in Code by Scott Rosenberg (of Salon.com fame). This book was the real-life chronicle of Mitch Kapor's attempt to create an Open-Source, cross-platform, Personal Information Management (PIM) tool.

For those who have not read the book, it is a frustrating and predictable (in 20/20 hindsight) failure to redefine email, tasks, notes, calendars, etc. as generic items that a user could work with interchangeably. They understood even then that people worked with email and those other "Outlook/Exchange managed items" differently than was originally intended. That the email often turned into tasks, documents, appointments, and near real-time conversations, and historical records. And, it was all Open Source. Thus, my comparison with Google Wave.

The Demise of Chandler

The system was called Chandler and the project had many issues. From a management perspective, the project suffered from:


From a technological perspective, the solution was problematic because:
As the book finishes, all Chandler ever became was a poor Calendaring system. Disappointing.

What, If Anything, Does Chandler's Failure Predict for Google Wave?

As I watched the demo, I was acutely aware of the overarching goals shared between Chandler and Google Wave, so I started looking for the signs of failure that were so obvious with Chandler...and I saw none of them. In fact, I saw many reasons to be encouraged that Google Wave was not going down the same paths and has a great chance of success and adoption!

I definitely feel the chances of spectacular failure similar to Chandler are nil. It is still early and it will be facinating to see what tie-ins to existing email and calendaring systems will be during some type of transition time. It will be bizarre to see which companies develop their own servers based on the specs and protocols. It will be awesome to see Waves embedded in blogs and news sites and that we can continue to participate in community and conversation anywhere we happen to be on the web or on our mobile devices.

Good write up Tony. I agree. I think the path wave is going has a chance to be used by a lot of people. I guess it remains to be seen if it fundamentally solves a problem I'm not quite sure I have yet.

Thanks! I'm not sure sure they are trying to solve a problem inasmuch as trying to enable communities to collaborate in the ways they would already do it if they could. It just seems like it starts as hyper-connected community chat conversations (improved IM) and degrades gracefully to email-style communication for those who either aren't online right then or prefer to be less transparent about their thought process. Then, it combines that with the wiki/gmail conversation and collaboration so that the messaging isn't the email trail hell that we all know and love but instead becomes comments and collaboration--but all in one.
I'm definitley going to keep my eye on this one...

cool, please guidance so that I can create a blog like yours